Thanks to all who responded!  We received responses from 679 individuals from all types of libraries and who fill many different roles in their libraries. The largest group of respondents was library directors (41%).

We evaluated responses and we are contacting respondents who expressed concerns or made comments, in order to determine what steps MLS can take to enhance services to better satisfy the membership. More detailed notes about specific service areas follow the summary of results.

The results were analyzed to eliminate some responses, i.e., duplicate responses; and because BiblioTemps® and MassCat are used by such a small number of libraries we did not include responses from non-participants in the analysis of importance and satisfaction. 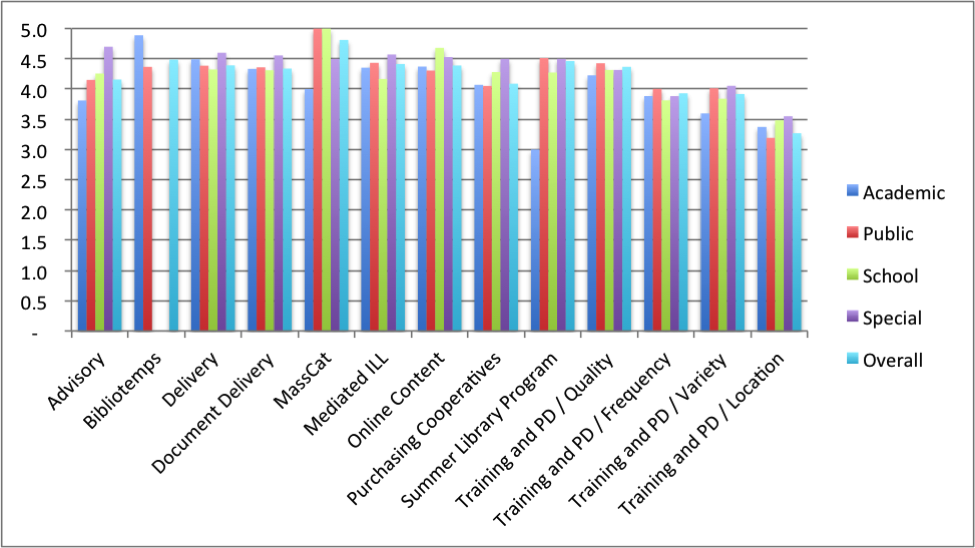 Members continue to rate delivery as highly important and remain highly satisfied with the service with an average rating of 4.4 out of 5 for both measures. Comments were made regarding isolated issues of sort time and accuracy, which we will address with our contractor.

Members are highly satisfied with the document delivery service in general with an average score of 4.3 out of 5.

Because the survey was open to all members, importance was not rated highly. Respondents on satisfaction tell a different story: MassCat users are very satisfied with the service with an average score of 4.8 out of 5. Non-users were not included in the graphical and aggregated data for importance and satisfaction (above).

Members are highly satisfied with the mediated interlibrary loan service in general with an average score of 4.4 out of 5. Some respondents were unclear that mediated interlibrary was still a service. We are convening member forums, offering ILL Webinars and communicating with the networks to get the word out. Information on our website is also updated and reflects the current status as well as the plans for the transition.

Respondents rated online content as MLS’s most important service area: 4.5 out of 5. Satisfaction was also high at 4.4 out of 5. Notable comments generally focused on the content included in the statewide databases and its applicability to academic libraries and school libraries. Academic and school libraries, however, actually represent the highest use; as shown below. MBLC and MLS worked jointly to select the databases with significant member participation. At MLS, our online content efforts are guided by recommendations from the Resource Sharing Advisory Committee.

Based on the statewide contract pricing, full text retrievals are valued at $0.42 per download. Statewide databases are provided to all MLS member libraries and via geolocation throughout the Commonwealth at no cost to libraries.

Overall satisfaction with the Purchasing Cooperative has increased since last year. Positive comments focused on the importance of the purchasing cooperatives in providing discounted library materials and supplies. Dissatisfaction among libraries was primarily due to the change in structure from the previous cooperative purchasing initiatives. We are working to help libraries understand the new structure and communicate opportunities more often so members can realize the full potential of the savings and discounts available to them.

Overall satisfaction was very high among public libraries, the target audience for the program. Ratings for importance were mid-range because many responding libraries are not users in public libraries.

The survey revealed that libraries using our continuing education program are largely satisfied. Public libraries, our biggest consumer, express increasing satisfaction. Our academic, school, and special library liaisons are exploring opportunities for collaborative programming and building relationships in these communities to build upon current programming.

Far and away the most persistent low response is that training locations do not meet libraries’ needs. By responding to specific requests for workshops and producing more online training, we are addressing dissatisfaction with locations. 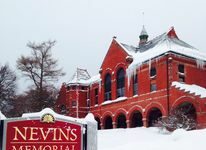 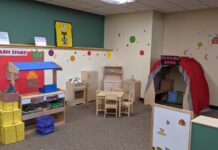